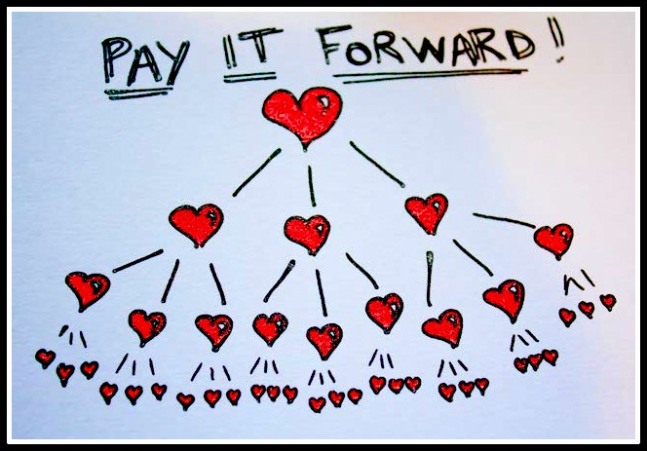 I will admit it. I can be greatly affected by movie themes. I walked out of “Saving Private Ryan” to the amazement of my friends (who still tease me about it to this day), upon seeing a soldier walk across the sand carrying his arm. I had not known what the movie would be about and the reality of that scene was just too much for me. I generally go to or watch movies for pure entertainment, not for “deep messages”, having dealt with so much of that in my “real life”.  I am criticized for this, but guess what, it works for me and for the people and situations I am able to “be there for” in “real life” because I protect my need for what I appreciate as humor, for what I consider entertainment, and for what I experience as fantasy. By the way, some of the movies I enjoy, do include violence and mayhem.

There is one movie that I did not walk out on though, and believe it or not, with all of its syrup, the movie touched me deeply (Yes, I cried.).

That movie was “Pay It Forward” the plot for which is captured by Jim Beaver as follows:

“Young Trevor McKinney, troubled by his mother’s alcoholism and fears of his abusive but absent father, is caught up by an intriguing assignment from his new social studies teacher, Mr. Simonet. The assignment: think of something to change the world and put it into action. Trevor conjures the notion of paying a favor not back, but forward–repaying good deeds not with payback, but with new good deeds done to three new people. Trevor’s efforts to make good on his idea bring a revolution not only in the lives of himself, his mother and his physically and emotionally scarred teacher, but in those of an ever-widening circle of people completely unknown to him.” 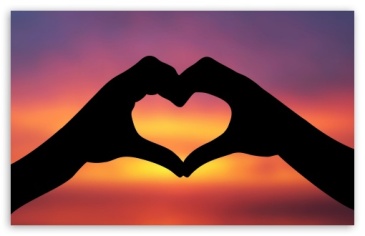 Here’s what I think. First, I truly believe in the concept of “getting beyond your own fears” and thereby “healing yourself” by being concerned about the needs of others. This concept does not mean neglecting your own needs. It actually implies, getting your own “act together” so that you can be “there for others”. Second, I believe small acts, unknown to others, can have huge impact. The movie actually teaches even more, including messages about the fact that those in teaching or mentorship positions can play life changing roles in children’s lives and that healing can come in many forms. Though I would consider myself to always have been a giver, I was sometimes self-critical when I was only able to make small contribution to a situation that might help others. I think the movie made me more aware of how, even if I could not give on a large scale, I could help on a small one. In fact, I gave up membership at an organization that pressured its participants by making public display of what people contributed.

So, I wonder in honor of Valentine’s Day: 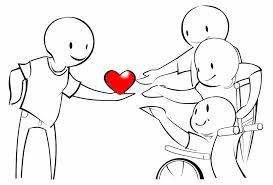 Please “pay it forward” by sharing your comments below.